Proposed revisions to the Nutrition Facts label, released today by the Food and Drug Administration, received mostly high marks from the nonprofit Center for Science in the Public Interest, which lobbied for the passage of the 1990 law requiring nutrition labels on packaged foods. CSPI especially welcomed the proposed new emphasis on calories, revision of certain foods' serving sizes, and new line for added sugars. But the group says the agency should revise its proposal to include a Daily Value for added sugars and to further lower the Daily Value for sodium to 1,500 milligrams.

"Nutrition Facts labels have helped millions of Americans select healthier diets and have spurred food companies to compete more on the basis of nutrition," said CSPI executive director Michael F. Jacobson. "But industry practices and understanding about nutrition have changed since the labels first appeared on packages 20 years ago. While the FDA is off to a strong start, the agency must do more to ensure that these labels communicate better advice on sugar and salt."

Adding a line for added sugars, which the FDA has proposed doing, is a major step forward, says CSPI. That's because nutritionists are much less concerned about the naturally occurring sugars in fruit and milk than the high- fructose corn syrup, sucrose, or other sugars added to foods. However, the group will strongly urge the FDA to define a Daily Value for added sugars so consumers could know how much of a day's worth a food contains. CSPI recommends a Daily Value of 25 grams—about six teaspoons—considerably less than the 23 teaspoons the average American now consumes. Thus, the Nutrition Facts label for a 16.9-ounce bottle of soda would indicate that its 58 grams of added sugars represents 230 percent of the DV—a fact that the soda industry would prefer not to see revealed on labels, according to CSPI. Sugar drinks are a major contributor to obesity, diabetes, heart disease, and other health problems.

The Food and Drug Administration did propose lowering the Daily Value for sodium from 2,400 to 2,300 milligrams. But the Dietary Guidelines for Americans recommends that people over 50, African-Americans, and people with hypertension—which adds up to about two-thirds of adults—should limit themselves to 1,500 milligrams of sodium per day. CSPI says that that lower level would be more protective of the public's health. Plus, the FDA typically bases Daily Values on the most vulnerable segment of the population. (For instance, the Daily Value for iron is 18 milligrams, the recommended level for women 50 and younger, and not 8 mg, the recommended level for men and older women.) As it happens, Americans average about 4,000 milligrams of sodium per day. That level is causing about 100,000 more deaths per year from heart attacks and strokes than would occur if people were consuming 2,000 milligrams per day, says CSPI.

CSPI gave the FDA high marks for proposing to increase the prominence of calories and for proposing that the "fiber" listed on Nutrition Facts labels excludes purified, processed fibers such as maltodextrin and inulin, which are not as beneficial as the intact, unprocessed fiber in whole foods. CSPI also supports the agency's proposal to remove the unnecessary "calories from fat" statement on labels and the table at the bottom of the nutrition label that lists nutrient levels for 2,000- and 2,500-calorie diets, and to replace vitamin A and C on labels with potassium and vitamin D, because many Americans get too little of those nutrients.

"The Obama Administration, and the First Lady's Let's Move initiative in particular, are making enormous strides this week with their announcements on in-school food marketing, on nutritional improvements in after-school and childcare settings, and with these proposed revisions on Nutrition Facts panels," Jacobson said.

If the FDA finalizes its November proposal to eliminate partially hydrogenated oil from the food supply, CSPI would also urge the FDA to delete the line on Nutrition Facts for trans fat. CSPI was the group that petitioned the FDA to add such a line—the only change the FDA has made in the years since the labels became mandatory in 1994. 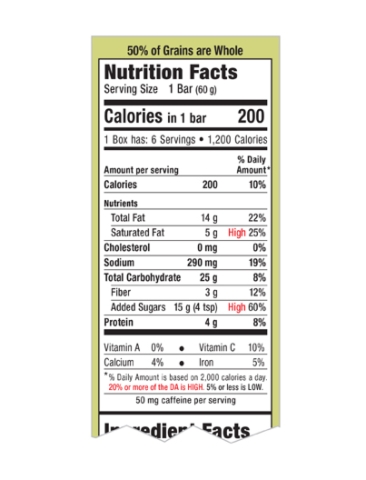 CSPI is also supporting the Food Labeling Modernization Act, which would require the FDA to develop a mandatory front-of-package nutrition labeling system and solve other problems with food labels. Front-of-package labeling might use symbols, such as green, yellow or red dots or a numerical score, to indicate the overall nutritional quality of the food. The bill, sponsored by Senator Richard Blumenthal (D-CT), Representative Rosa DeLauro (D-CT), and Representative Frank Pallone (D-NJ), would require the FDA to define "natural," set more realistic serving sizes, and require manufacturers that make claims such as "made with whole grains" to prominently disclose what percentage of those grains are actually whole. It's not uncommon to find breads, waffles, crackers, and other products that claim to be "made with whole grains" to be made mostly of white flour.

CSPI panned the "Facts Up Front" system advanced by the Grocery Manufacturers Association and the Food Marketing Institute.

"Nutrition Facts labels are a success because the FDA, and not the food industry, decides what's on the label and what the label looks like," Jacobson said. "The industry's ‘Facts Up Front' isn't designed to promote the healthiest diets but to keep the government from requiring top-notch front-of-package labeling."