WASHINGTON—Eating out would be a whole lot easier for nutrition-conscious customers in chain restaurants, if legislation introduced today by Senator Tom Harkin (D-IA) and Representative Rosa DeLauro (D-CT) becomes law. The Menu Education and Labeling (MEAL) Act would require fast-food and other chain restaurants to post calories on menu boards and food display tags and calories, saturated plus trans fat, carbohydrates, and sodium on printed menus.

The bill has the strong support of the Center for Science in the Public Interest, which has led the national campaign for menu labeling, including measures passed in New York City, California, Massachusetts and other jurisdictions. The MEAL act would apply to chains with 20 or more outlets and would exclude small mom-and-pop restaurants and custom orders or temporary menu items at chain restaurants. 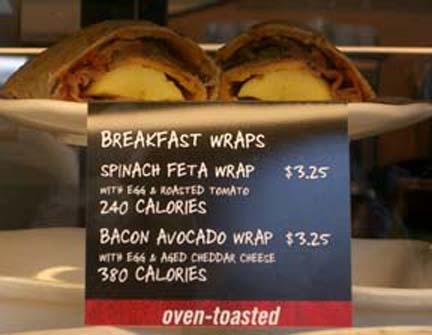 This Starbucks in New York City posts calories on its menu boards.

"Consumers play an impossible guessing game trying to make healthier choices in restaurants," said CSPI nutrition policy director Margo Wootan. "Who would guess that a large chocolate shake at McDonald's has more calories than two Big Macs or that a multigrain bagel at Dunkin' Donuts has 140 more calories than a jelly donut?"

Americans get a third of their calories from, and spend half of their food dollars on, meals outside the home. At table-service chains like Ruby Tuesday, Macaroni Grill, and Chili's, it's easy to find 1,000-calorie appetizers, 1,000-calorie entrees, and 1,000-calorie desserts. Not surprisingly, about two-thirds of American adults and a third of children and adolescents are overweight or obese, according to the Centers for Disease Control and Prevention.

"Access to nutrition information at restaurants is more important than ever, particularly given that a number of studies link eating out with higher caloric intake and obesity," DeLauro said. "With few restaurants providing easy-to-use and easy-to-find nutrition information, the MEAL Act represents an incremental step toward combating increasing obesity rates."

Restaurant industry lobbyists have tried to capitalize on the popularity of menu labeling by writing a competing bill called the LEAN Act. But far from promoting menu labeling, that bill would nullify the state and local measures already in effect and preempt others from being enacted in the future. Health groups oppose it.

Labeling on packaged food, which was implemented 15 years ago this month, gives consumers nutrition information for foods eaten at home. It’s high time consumers have a few nutrition facts when eating out, Wootan said.

"Overweight, poor nutrition and diet-related diseases are public health threats of the first order – contributing to numerous chronic health conditions, including heart disease, cancer, diabetes and stroke," Harkin said. "But the issues aren't just medical – they also affect our economy. We spend almost $2 trillion annually on health care in the United States, 75 percent of which goes for treating and managing chronic diseases that are, in many cases, preventable. It is time to take preventative action and give consumers the tools they need to take better control of their diet and health."

In New York City, prior to the implementation of its menu labeling policy, only 4 percent of restaurant customers saw nutrition information at restaurants that provided it (generally on websites, tray liners, posters, or brochures).

After menu labeling, 90 percent of New Yorkers have read the nutrition information on menus in chain restaurants, and a remarkable 82 percent say menu labeling has affected what they order.

"Nutrition information on web sites, tray liners and other inconvenient places doesn't work," Wootan said. "If people are going to be able to use nutrition information, it has to be at the point of ordering, not on a poster back by the bathroom or after they’ve ordered the food."