Eat at Your Own Risk: The Lifeguard is NOT on Duty Seafood can be healthy but entrées at Joe's Crab Shack are swimming in artificial trans fat, according to the nonprofit Center for Science in the Public Interest. Today the food watchdog group is calling on the 130-restaurant company to stop using a partially hydrogenated margarine-butter blend that appears to be responsible for dangerously high levels of trans fat. CSPI is also renewing its call for the Food and Drug Administration to prohibit the use of partially hydrogenated oils—the source of artificial trans fat—altogether.

Joe's Pasta-laya, described on the menu as "shrimp and andouille sausage cooked in a garlic butter sauce full of mushrooms, bell peppers, tomatoes and onions served over penne pasta," has 14 grams of trans fat—which is roughly the American Heart Association's recommended limit for a week. That's on top of more than a day's worth of saturated fat (24 g). The chain's Crab Cake Dinner (14 g trans) and Redfish Pontchartrain (16 g trans) also contain alarmingly high levels.

The Steampots at Joe's Crab Shack—Noah's Ark-like portions of crawfish, shrimp, crabs, clams, mussels, lobster, and/or sausage, served in various combinations with an ear of corn and new potatoes—all have at least a week's worth of trans fat, thanks to the side of dipping "butter." The KJ Steampot—so named for its "light Kendall-Jackson wine sauce"—and Joe's Great Barrier Steampot each have 25 grams of trans fat.

"Joe's Crab Shack is a nutritional shipwreck of a restaurant chain, ruining expensive seafood with cheap, industrially produced trans fat designed to simulate butter," said CSPI executive director Michael F. Jacobson. "Until the company fixes the problem and switches to a healthier substitute, eat at Joe's at your own risk—an increased risk of heart disease and premature death."

In 2007, Joe's Crab Shack publicly said that it was eliminating trans fat altogether. McDonald's agreed to an $8.5 million settlement in 2005 after it was sued for breaking a public promise to eliminate trans fats from its frying oil.

A CSPI nutritionist visited Joe's Crab Shack locations in two Maryland counties. At a Joe's in Prince George's County, Maryland, she photographed the Nutrition Facts label for the SunGlow European Style Butter Blend Margarine that the chain uses. Manufactured by Ventura Foods, the substance has 3.5 g of trans fat per 1 tablespoon serving. Joe's staff in a Montgomery County, Maryland, restaurant confirmed that they use real butter instead, due to the county's strict curbs on artificial trans fat in restaurant foods. 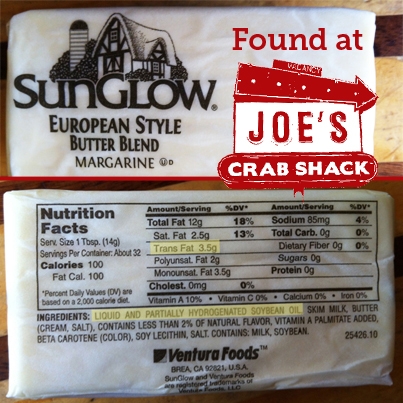 "SunGlow tastes, looks, and performs like butter," Ventura Foods states on its web site, citing its "price stability versus butter" and its "revolutionary flavor delivery system." But CSPI says that even if Joe's Crab Shack wanted to stick with cheap margarine instead of butter, SunGlow makes a trans-fat-free version of its European Butter Blend Margarine. (With Steampots selling for between $21.49 and $41.99, consumers might expect they're getting real butter.)

Partially hydrogenated oil, the source of artificial trans fat, is a powerful promoter of heart disease. The Institute of Medicine recommends consuming as little trans fat as possible. Artificial trans fat is mostly prohibited in restaurant foods in California, New York City, and a number of other cities and counties; bad publicity and litigation threats have spurred the elimination of partially hydrogenated oils from many chain restaurants elsewhere.

In November, the Food and Drug Administration published a preliminary determination that partially hydrogenated oil is no longer generally recognized safe for use in food. The proposed rule was open for a period for public comment that ended in March. One comment, filed by seafood chain Long John Silver's, described how it was able to transition to a trans-fat-free menu in about six months' time, between August 2013 and January 2014.

"Joe's Crab Shack knows it has safer alternatives, and uses them where required—but only where required," said Jacobson. "The behavior of Joe's and other irresponsible companiesshows why the FDA needs to finish its work to eliminate partially hydrogenated oil from the food supply once and for all."