Did a vitamin B-12 deficiency drive Mary Todd Lincoln mad?

Important advice about B-12 for those older than 50. Historians have long speculated about what caused First Lady Mary Todd Lincoln’s erratic behavior before, during, and after her husband’s Presidency. Late in her life, she was even committed to a mental hospital for several months.

A U.S. cardiologist has proposed a new explanation: Mrs. Lincoln was suffering from pernicious anemia, the result of a vitamin B-12 deficiency. 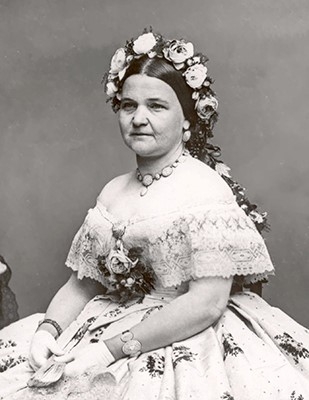 This anemia is named “pernicious” because it was often fatal until the 1920s when researchers discovered it could be cured with the proper foods. The symptoms are fatigue, tingling and numbness in the hands and feet, muscle weakness, and loss of reflexes. Severe vitamin B12 deficiency can cause confusion, depression, memory loss, and dementia.

While early pernicious anemia can now be treated, the nerve damage and dementia from a prolonged vitamin B-12 deficiency cannot be.

That’s a major reason why the National Academy of Sciences recommends that adults older than 50 get most of their daily vitamin B-12 requirement from fortified foods like breakfast cereals or from a multivitamin or other dietary supplement.

Not everyone older than 50 can absorb enough of the vitamin B-12 found naturally in food, but everyone no matter their age can easily absorb the synthetic B-12 in fortified foods and dietary supplements.

When we eat food that naturally contains vitamin B-12, gastric acid and the enzyme pepsin in the stomach liberate the B-12 from the food. At the same time, the acid-producing cells in the stomach wall secrete a transport protein called “intrinsic factor.” Intrinsic factor meets up with B-12 later in the small intestine and delivers it to the intestinal walls for absorption into the blood. 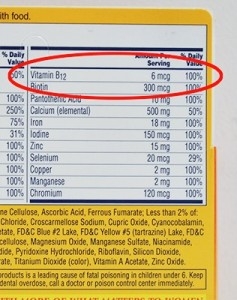 But too little stomach acid can mean little or no free vitamin B-12 available for this absorption.

The National Academy of Sciences estimates that 10 percent to 30 percent of adults older than 50 years produce too little stomach acid to digest the B-12 from food. But not everyone knows whether they’re in this group.

So to play it safe, the Academy recommends that everyone over 50 get most of their daily requirement of B-12 from the more reliably-absorbed synthetic form of B-12, which is found in fortified foods and supplements.

The daily requirement for B-12 is only 2.4 micrograms, which is available from most multivitamins or fortified breakfast cereals.

This doesn’t mean that we must get this synthetic B-12 every single day or something bad will happen. But, it’s something older adults should do regularly just to be safe. The dementia, which can take years of deficiency to develop, is after all, irreversible.

Most of the foods that are good natural sources of B-12 are animal foods like fish, meat, poultry, and dairy products. That’s why strict vegetarians and vegans are at greater risk of developing vitamin B12 deficiency unless they include fortified foods or supplements in their diets.

Find this article about vitamin B-12 interesting and useful? Nutrition Action Healthletter subscribers regularly get sound, timely information about staying healthy with diet and exercise, delicious recipes, and detailed analyses of the healthy and unhealthy foods in supermarkets and restaurants. If you’re not already subscribing to the world’s most popular nutrition newsletter, click here to join hundreds of thousands of fellow health-minded consumers.