Does A2 milk relieve GI distress? “I had to cut dairy out of my diet completely because it was causing my discomfort and bloating,” says “Jilly” on The a2 Milk Company website. “a2 Milk allows me to eat all my favourite foods again without the bad side effects.”

“Ordinary cows’ milk contains a mix of A1 and A2 protein types,” explains a2 Milk’s label. “a2 Milk comes from cows that naturally produce only the A2 protein and no A1.”

The company is targeting people who think they can’t digest the lactose in milk.
“Millions of Americans have discomfort after drinking ordinary cows’ milk, but in some cases, it is possible their symptoms may be caused by a sensitivity to the A1 protein!” says a2 Milk’s website. 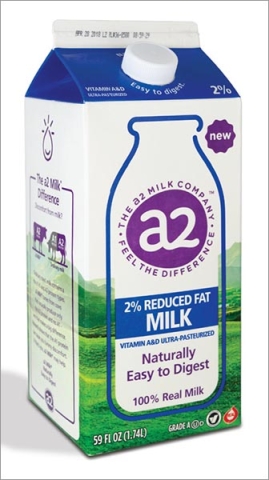 It’s skimpy and (surprise!) largely funded by The a2 Milk Company.

In the largest study, Chinese researchers randomly assigned 600 adults to drink 10 oz. of a2 milk on one day and 10 oz. of ordinary milk on another. All the participants said they had lactose intolerance.

But the differences weren’t impressive. For example, on a scale of 0 to 9, the volunteers reported a typical bloating score of 3 three hours after drinking ordinary milk and a score of 2 after drinking a2 milk.

“If 0 is no bloating and 9 is the worst bloating you’ve ever felt, some people might find that difference meaningful,” says Shanti Eswaran, a gastroenterologist and assistant professor of medicine at the University of Michigan Medical Center. “But, clinically, the difference is probably negligible.”

The study also had several irregularities.

And the researchers put people who had worse symptoms when they drank the a2 milk into the “no difference in symptoms” category—stacking the deck in favor of a2 milk.

Could the a1 protein cause the GI distress that many people blame on lactose?

“Maybe that’s the case for a subset of people, but probably not the majority who complain of lactose intolerance,” says Eswaran. “Most can’t handle milk or ice cream, but do fine with yogurt and cheese, which are very low in lactose but high in milk protein.”

Eswaran says that she is “intrigued” by a2 milk, but far from sold on it yet.

“We need a study in a North American population,” she says. “The Chinese drink far less milk than we do, yet most a2 studies have been done in China. So it’s not clear how the results apply to Americans.”

And we need studies that aren’t funded by The a2 Milk Company.

The Bottom Line: Can a2 milk prevent “digestive discomfort”? Not based on the evidence so far.