When we were screening candidates for the first Xtreme Eating awards in 2007, we were shocked to see 1,500-calorie entrées. This year, nearly all of our “winners” hit (or just missed) the 2,000-calorie mark. And a few doozies topped 3,000 calories. You could take half home and still overeat.

The sad truth is that it’s not hard to find Xtreme Eating winners. Virtually every chain has viable contenders. But this year, we’re giving a special XXXtreme Eating award to The Cheesecake Factory. It took three of our nine coveted spots...and, as usual, it could easily have filled all nine. Congrats! 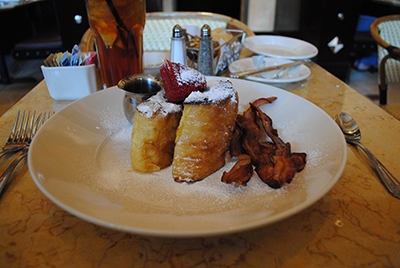 “The ‘Best’ French Toast Ever!” says the Sunday brunch menu at The Cheesecake Factory(150 locations). “Our Extra Thick Slices of Rustic French Bread Baked and Grilled Golden Brown. Topped with Powdered Sugar and Served with Maple- Butter Syrup with Bacon or Grilled Ham.”

The chain is talking about its Bruléed French Toast, which—even with the optional bacon—sure doesn’t look like it’s got 2,780 calories, 93 grams of saturated fat (almost a full work week’s worth), 2,230 milligrams of sodium, and 24 teaspoons of sugar.

Don’t just blame the 200-calorie side of bacon or ham. It’s that largely invisible custard-like filling in the bread, plus the quarter cup of butter-infused syrup. To neutralize the calories in your brunch, you’d have to swim laps for seven hours. 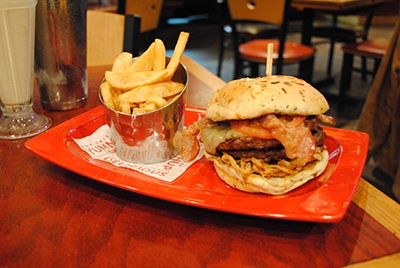 Red Robin doesn’t skimp on its Gourmet Burgers. Take the A.1. Peppercorn, which is topped with “hardwood-smoked bacon, melted Pepper-Jack, A.1. Peppercorn Spread, tomatoes and crispy onion straws” (AKA fried breaded onion strips).

But what makes the chain so special is its generosity.

First, all “burgers are proudly served with Bottomless Steak Fries,” so you can “proudly eat as many as you want.” (You’ll be bursting with pride.) Second, you can “Make it a Monster” by adding another (6 oz.) beef patty for just $1.99 more (unless you include future medical expenses). Such a bargain.

If your 1,670-calorie “Monster” burger and unlimited 370-calorie servings of fries make you thirsty, Red Robin offers Classic milkshakes (for $3.99). And, of course, you can “make it a Monster Milkshake with a refill tin” for just a buck more. Maybe you’d like a Monster Salted Caramel Milkshake (“A salty, sweet and sinful blend of caramel and Red Hawaiian Sea Salt”). Ka-ching! Here comes 1,500 more calories...and two days’ more sodium.

The entire Monster meal delivers almost two days’ worth of calories (3,540), 3½ days’ saturated fat (69 grams), and four days’ sodium (6,280 milligrams). Roughly half of each comes from the burger plus just one serving of Bottomless Steak Fries and half comes from the shake. And you can blame the shake for most of the estimated 38 teaspoons of added sugar.

It’s like eating seven McDonald’s Double Cheeseburgers washed down with a quart of Coke. Want to burn off the calories? You’d need a 12-hour brisk walk.

“Smile, you’re at Red Robin,” says the menu. And after you smile, make sure to burp. 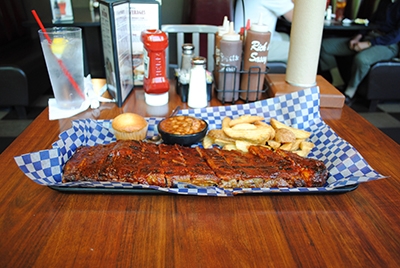 “The Big Slab” of St. Louis-Style Spareribs at Famous Dave’s (200 locations) doesn’t sound dainty. Each slab, which is “slathered with sauce over an open flame,” yields nearly 1½ pounds of meat.

But why stop there? To round out the meal (and his patrons), Dave throws in a “choice of two sides and a Corn Bread Muffin.” If you go with the muffin, Famous Fries, and Wilbur (baked) Beans, you’re talking 2,770 calories (more than a day’s worth) and 54 grams of saturated fat seasoned with 4,320 milligrams of sodium and 14 teaspoons of sugar. That’s the calories and sat fat of a bowl of Dave’s Famous Chili plus two Georgia Chopped Pork Sandwiches with two sides of Dave’s Cheesy Mac & Cheese and a Down Home Banana Pudding. Urp!

Not planning on mowing the lawn for 7½ hours after dinner? Expect the spareribs dinner to end up in your spare tire. 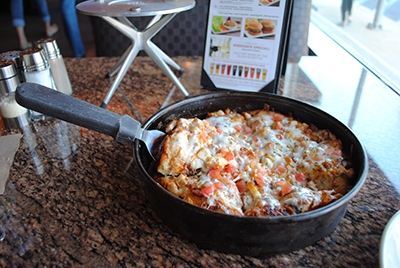 “Grilled garlic chicken, Applewood smoked bacon, jack and cheddar cheese, red onions, diced tomatoes and a drizzle of ranch” doesn’t sound so heavy. But the pound of pizza dumps 2,160 calories, 30 grams of saturated fat, and 4,680 milligrams of sodium (three days’ worth) in your lap.

Eating one BJ’s Small is like eating three Pizza Hut Personal Pan Pepperoni Pizzas. You’d have to pedal your bike, nonstop, for 5½ hours to burn the pizza off.

“Brought to your table in the pan and fresh from the oven!” says the menu.

Think of it as a fresh layer of deep belly fat with your name on it. 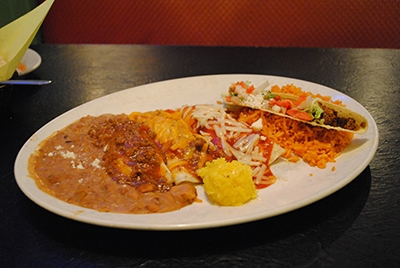 The Chevys Super Cinco Combo at Chevys Fresh Mex (51 locations) is “for those who take Fresh Mex SUPER seriously!” says the menu.

“Two enchiladas: one beef, one chicken, a Crispy or Soft Beef Taco, a hand-rolled Pork Tamale and a handcrafted Chile Relleno.”

Since that’s clearly not enough food, it’s “Served with Fresh Mex rice, our signature sweet corn tamalito and choice of homemade Beans a la Charra or Refried Beans made with bacon or Vegetarian Black Beans.”

Even if you ignore the free basket of chips and the salsa that Chevys (like most Mexican restaurants) brings to your table just when you’re hungriest, the Super Cinco delivers 1,920 calories, 36 grams of saturated fat, and 3,950 milligrams of sodium. You might as well eat 11 Taco Bell Crunchy Tacos.

Planning on playing 3½ hours of singles tennis tonight? Didn’t think so. “You can have it all and eat it too!” says Chevys. And look like you ate it all, as well. 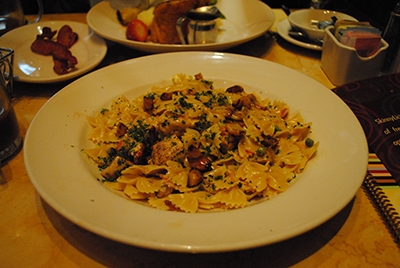 “Bow-Tie Pasta, Chicken, Mushrooms, Tomato, Pancetta, Peas and Caramelized Onions in a Roasted Garlic-Parmesan Cream Sauce” doesn’t sound excessive. Sure, the Farfalle with Chicken and Roasted Garlic has a cream sauce, but how much harm could chicken, pasta, and some veggies do? We’re talking The Cheesecake Factory, so you know this isn’t going to end well.

Turns out the pasta’s 2,410 calories and 63 grams of saturated fat (a three-day load) are what you’d get in five single-serve packages of Stouffer’s frozen Classics Chicken Fettuccini Alfredo, each topped with a pat of butter. (The Farfalle has “only” 1,370 milligrams of sodium, a little less than a day’s worth.)

No problem. You were planning on taking a five-hour jog tonight, right? 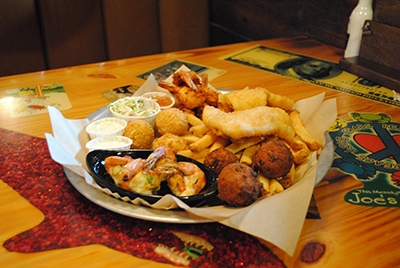 “Born in the heart of Texas, we’ve been serving fun-loving people, great food, drink and memories since 1991,” says Ignite Restaurant Group about its Joe’s Crab Shack chain (130 locations). And Joe has been sending diners home with long-lasting memories...both in mind and body.

Talk about stuffed. The friedfoodaganza comes to 3,280 calories (your fill for today and half of tomorrow), 50 grams of saturated fat, and 7,610 milligrams of sodium (no more for you for the next five days). To burn that many calories, you’d have to play golf (without a cart or a caddie) for 11 straight hours.

If you ordered two of Red Lobster’s Admiral’s Feasts (fried shrimp, scallops, clam strips, and flounder), complete with French Fries and Cheddar Bay Biscuits, you’d get about the same calories...but less than half the sat fat. 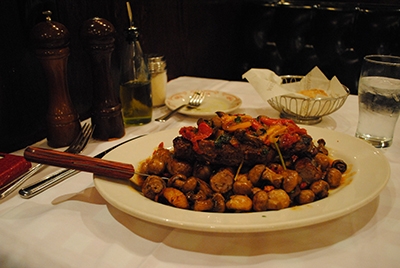 “Many guests refer to this as a meal in itself and it is the WOW of all steaks.”

Some meal. The Prime New York Steak Contadina style, for example, packs 2,420 calories. The 1,250- calorie steak alone is like eating five McDonald’s Quarter Pounder beef patties. The 1,170-calorie Contadina-style “garnish” adds another four Quarter Pounder patties, with a Cheeseburger on the side.

The “meal” delivers 66 grams of saturated fat (3+ days’ worth of damage) and 5,620 milligrams of sodium. To burn off its calories, you’d have to hit the rowing machine for 7½ hours. WOW is right. 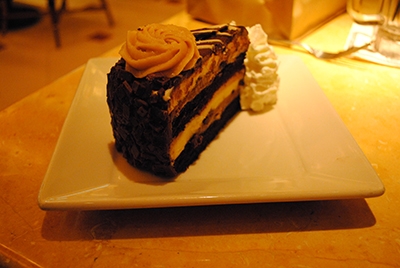 “Reese’s Peanut Butter Cups in Our Original Cheesecake with Layers of Delicious Fudge Cake and Caramel.” There’s nothing like finishing your Cheesecake Factory meal with aReese’s Peanut Butter Chocolate Cake Cheesecake, with its 1,500 calories, 43 grams of saturated fat, and 21 teaspoons of (mostly) added sugar. To turn the calorie clock back to zero, you’d have to do aerobics for 4½ hours.

“More than 40 legendary desserts…you should only pick a favorite after trying them all,” says the menu. That Cheesecake Factory: looking out for its bottom line while ignoring its customers’ growing bottoms.