65 Percent of Food Ads Were for Candy, Sugary Cereals, Other Foods of Poor Nutritional Quality Nearly two-thirds of the food ads on kids’ television powerhouse Nickelodeon were for Baby Bottle Pops, Frosted Flakes, Fruit Gushers, and other junk foods, according to new research published by the Center for Science in the Public Interest.  The nonprofit nutrition and food safety watchdog group found that the network—which prides itself on its health and wellness efforts—aired no ads for fruits or vegetables or any public service announcements during the 28 hours of programming CSPI examined.  And while the percentage of ads that were for unhealthy food has steadily dropped since CSPI began monitoring Nickelodeon in 2005, the raw number of junk foods remained constant, but for an unexplained one-time drop in 2012. 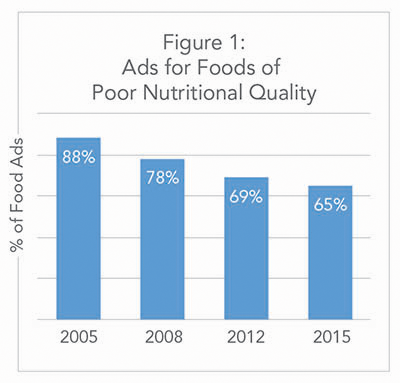 “Nickelodeon is failing its viewers and their parents by refusing to adopt reasonable nutrition standards to ensure that its advertising does not harm children’s health,” said CSPI deputy director of nutrition policy Jessica Almy.  “Nickelodeon was basically a fruit- and vegetable-free zone during our study period, instead broadcasting ads for candy, sugary cereals, and unhealthy restaurant meals.” 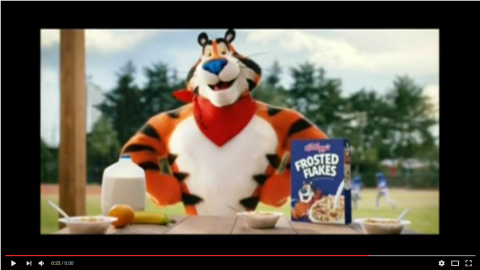 Kellogg’s is a member of the self-regulatory CFBAI, but Frosted Flakes did not meet the expert panel’s nutrition standards.

Of the food ads shown on Nickelodeon during CSPI’s most recent study, 77 percent were from companies that belong to the Children’s Food and Beverage Advertising Initiative, a self-regulatory program administered by the Council of Better Business Bureaus.  Participating companies complied with the CFBAI’s nutrition standards. However, fewer than half (46 percent) of those ads met a stronger set of nutrition standards developed by a panel of experts convened by CSPI and based on the Dietary Guidelines for Americans.  In contrast, almost all (94 percent) of the ads from Chuck E. Cheese’s, Sonic, Wendy’s, and other non-CFBAI members did not meet the expert panel’s standards.  Nickelodeon is not a member of the industry-wide self-regulatory initiative, and, unlike competitors the Walt Disney Company and ION Television’s Qubo, Nickelodeon does not require that its advertisers meet nutrition guidelines.

Even some of Nickelodeon’s self-promotional bumper spots feature unhealthy foods, such as hot dogs tucked in to sleep in a white-flour bun and SpongeBob SquarePants over-eating burgers (“Krabby Patties” from the show).

“Saturday is Nickelodeon’s ‘Worldwide Day of Play.’  The network should mark the occasion by announcing a policy to eliminate all junk food ads during children’s TV programming,” Almy said. “That would do a lot more to support children’s health than Nick’s once-a-year PR stunt.”